The Benefits of Apple Cider Vinegar

You are here:Home-Health and Wellness-The Benefits of Apple Cider Vinegar

The Benefits of Apple Cider Vinegar 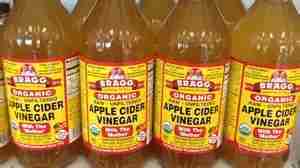 Apple cider vinegar? Since 5,000 B.C., the Babylonians had been using it as a preservative and condiment; and long before Cleopatra’s costly cocktail, Hippocrates had extolled vinegar’s medicinal qualities. In fact, the Vinegar Institute (yes there is a vinegar institute) touts the tart liquid as one of our earliest remedies.

Throughout the ages, vinegar has been made through the fermentation of a long list of materials, including molasses, dates, sorghum, fruits, berries, melons, coconut, honey, beer, maple syrup, potatoes, beets, malt, grains and whey. But of all the vinegars on the block, the vinegar made from apple cider is the darling of contemporary remedies.

While science has yet to prove many of the claims made about apple cider vinegar, it remains a wildly popular product, serving duty in a variety of roles, from beauty and homemaking to health. The following uses include some supported by science and some merely backed by folk wisdom.

Some swear by using a rinse of apple cider vinegar mixed with water and swished about the mouth to reduce bad breath. It may help for you, but just be sure not to take it straight. The high acidity in the vinegar could erode tooth enamel, according to Columbia University.

Taking one to two teaspoons of apple cider vinegar daily can help acid reflux. As it’s explained, most people mistakenly believe that acid reflux is caused by an overproduction of acid, but it’s actually the opposite for many people: not enough acid. Again, don’t drink the vinegar by itself. Mix it in water, honey or tea if you’re going to try it.

Those who prescribe to folk remedies tell Reader’s Digest that if one suffers from diarrhea caused by a bacterial infection, apple cider vinegar may help due to its antibiotic properties. As well, some natural therapy experts suggest that apple cider vinegar can help calm intestinal spasms. If you’re suffering: Try mixing one or two tablespoons into water or apple juice and drink.

If you’re planning on indulging in a meal that you expect might not get along very well with your stomach, try drinking one teaspoon of apple cider vinegar mixed with one teaspoon of honey mixed in a small glass of warm water 30 minutes before you dine. This isn’t a science-based prevention, but one based on home remedy and folklore.

If there was a clear-cut cure for the hiccups, we would all know about it and never suffer the frustrating things again. Alas, it’s eat peanut butter, hold your breath, drink water upside-down, be scared and any number of other folksy remedies. But eventually, it seems like one of these sticks and does indeed seem to stop them in their tracks. So next time you have a round of uncontrollable hics, you might want to try sipping a teaspoon of apple cider vinegar mixed in water.

It seems that whatever hair camp you fall into, vinegar can help fix dry, oily, or lackluster hair.

A dab of apple cider vinegar applied with a cotton ball is commonly recommended to make a pesky mosquito bite stop itching. It will sting a bit, but it will help quell the prickly tickle.

Many who suffer the angst caused by skin problems — from psoriasis and eczema to dry skin and blemishes — praise apple cider vinegar for reducing inflammation and generally minimizing problems. Try dabbing it on affected areas with a cotton ball. However, be aware that the acid in vinegar can irritate your skin and make conditions worse, canceling out any benefits from the vinegar’s antibacterial properties.

Of all the ways in which people use apple cider vinegar, that which perhaps has the most potential is in helping with diabetes. Several studies have shown its positive effect on blood glucose levels; a 2007 study of participants with Type 2 diabetes found that two tablespoons of apple cider vinegar before bed lowered glucose in the morning by 4 to 6 percent.

If you’re a rat, that is. Several studies with rats have shown vinegar’s beneficial contribution to lowering cholesterol and high blood pressure. There’s no evidence that it can work on people, but research in these areas continues.

If there’s one promise that most supplements and superfoods love to claim, it’s their ability to aid in weight loss. For millennia, vinegar has been used to help lose weight; whether to factual effect or not has yet to be proven by science, but many people cling to the practice with devotion. It is highly acidic and may cause problems ranging from harm to the teeth to lower potassium levels, lower bone density, and interaction with some medications. As with all supplements, talk to your health care provider before starting a new regimen.